Bitcoin has broken out from downtrend resistance and appears to be poised for a new uptrend. Market conditions change dramatically when a switch from bear to bull occurs, and a “buy the dip” strategy is often the most effective.

For investors and traders unsure of how to do that, history shows that one specific level is the best place to buy BTC.

Bitcoin Bull Run Is Here: Time To Buy The Dip, Or Time To HODL?

During the last major crypto bull run, the term “HODL” was coined to reflect how violent each bull market crash was in Bitcoin. Rather than selling Bitcoin, seeking to rebuy the asset lower, the term’s originator recommended investors simply “hold on for dear life,” instead.

Selloffs are especially violent, but present an unrivaled opportunity to double-dip on ROI. During the 2016 and 2017 bull market, Bitcoin had several, over 35% crashes taking place in a matter of weeks to a month.

Price action and sentiment during these moments would get exceptionally frightening, making buying the dip more difficult in practice than it seems. But those that did manage to buy the dip were always handsomely rewarded for the risk taken.

Looking back over past price action, there could be one important level that acted as an ideal buy zone whenever Bitcoin retracted to touch it. If the same strategy works just as well during the next uptrend, the level could be the key to unlocking untold wealth.

Moving averages are visual-based line indicators that are added to price charts, based on statistical open and close data regarding price action. These moving averages can be used to find potential support or resistance and can act as a buy or sell trigger as price passes through it.

The 20-week moving average, according to historical Bitcoin price charts, may be the ideal level to buy just about every dip during a cryptocurrency bull market.

In the chart above, at least five different instances took place in 2016 and 2017 where Bitcoin price collapsed back to the 20MA. There, the cryptocurrency found strong support and rocketed off to toward the next psychological resistance level.

On average, each time Bitcoin price fell back to the 20MA, there was an over 100% gain that followed before the next correction. This means that each crash in Bitcoin was an opportunity to double your money.

Bitcoin has only just broken out from downtrend resistance. If the same sort of price action repeats, Bitcoin price has at least five major corrections back to the 20MA before the top and peak of the next cycle is in.

Before that happens, it may be wise to watch the 20-week MA as the prime zone to buy the dip in crypto for the most possible financial upside.

XRP, as well as Cardano and Algorand are all seeing an uptick in their respective market action. The coins are testing key resistance levels and could rally higher given the overall market sentiment that is trending bullish.

The technical picture for the third-ranked cryptocurrency by market cap suggests bulls are likely to see a breakout to recent highs around $0.32.

Ripple is bullish above an engulfing candle and a sustained uptrend could burst immediate resistance at $0.30. Further upsides bring $0.32 into frame, with a triangle breakout likely to aid bulls’ desires to retest prices at around $0.35.

The hourly technical picture suggests XRP/USD is also likely to see some sideways trading below $0.30 as the RSI is only slightly upturned. However, the MACD is forming a bullish divergence to indicate support for the upside is strong at current price levels.

A downward flip could see bulls rely on strong support at the 50 SMA at $0.288, which is a resistance-turned-support area.

Cardano bulls have recently struggled to form an uptrend, with the cryptocurrency outperforming most other top altcoins on the launch of its Shelley upgrade in July.

The momentum is with the bulls though as the cryptocurrency has surged over 3.5% in the past 24 hours. This comes as the staking of Cardano crosses 10 billion coins.

Above this level, ADA/USD could rally to highs of $0.16 short term. While a bearish breakout could see buyers protect gains at $0.13 and below that $0.11.

Algorand is one of the biggest gainers in the market today, surging by more than 40% in the past 24 hours to trade at $0.74 as of the time of writing.

The coin’s price rally follows news on the fundamental front after Borderless Capital recently revealed it was partnering with the staking protocol.

The latest price movement comes after bulls rallied to flip a bearish divergence that had formed following a similar upsurge earlier this month.

ALGO/USD is making higher highs and higher lows on the 4-hour charts. The RSI has formed a bullish divergence and shows no signs of weakness. However, the coin could see a dip to support levels around $0.60, which has been tested once in the past hour. Further support is at the 20 SMA ($0.53) and 20 SMA ($0.45)

YAM has crashed by 99% after security flaw was found

YAM token, a DeFi token launched on Tuesday, has crashed by more than 99% as of writing after a security flaw was uncovered.

After hitting a high of $167 on Wednesday, August 12, YAM crashed to near $0, with its market value melting away within minutes on Thursday, August 13.

According to a tweet from the YAM protocol creator Brock Elmore, the project has “failed.”

“I’m sorry everyone. I’ve failed. Thank you for the insane support today. I’m sick with grief.”

YAM’s demise started earlier today after it was discovered that its rebase function had a flaw that essentially means the protocol has no control over its on-chain governance.

With no fix, the token’s price on the market dropped out of the sky, the crash sending the market capitalization from $475 million to $0.62 within minutes.

In a Medium post today, the project’s team noted that the bug in the protocol’s rebasing function resulted in the generation of excess yCRV tokens to the YAM Reserves contract.

At one point, the flaw saw over $500,000 worth of the token added to the treasury with the subsequent failure to get a “bug-fix proposal” meaning that YAM’s treasury was now before the second rebase, no further governance actions would be “ungovernable.”

The result is that almost $750,000 worth of Curve tokens locked in the project’s treasury may end up lost.

The Yam.Finance team accelerated the project’s “death” via a tweet advising investors to exit.

“We are urgently investigating a potential flaw…We strongly advise exiting the Uniswap YAM/yCRV pool prior to rebase at 8 am UTC (35 mins).”

Interest in Yam.Finance hit frenzy levels after its launch, going viral as the Total Value Locked in the protocol surpassed $500 million.

Chainlink (LINK) rallied over 30% and it traded close to the $17.000 level against the US Dollar. It dethroned bitcoin cash and moved to the 5th spot in terms of the market cap.

In the last technical analysis, we discussed chances of a surge above $15.000 in chainlink (LINK) against the US Dollar. LINK did gain momentum above the $15.000 and surged over 30% in the past three sessions.

The upward move was strong as the price broke the $16.000 resistance and settled well above the 100 simple moving average (4-hours). During the rise, there was a break above a key bearish trend line with resistance near $13.300 on the 4-hours chart of the LINK/USD pair.

More importantly, the market cap of LINK overtook bitcoin cash and it moved to the 5th spot. A new all-time high is formed near $16.933 and the price is currently consolidating gains. 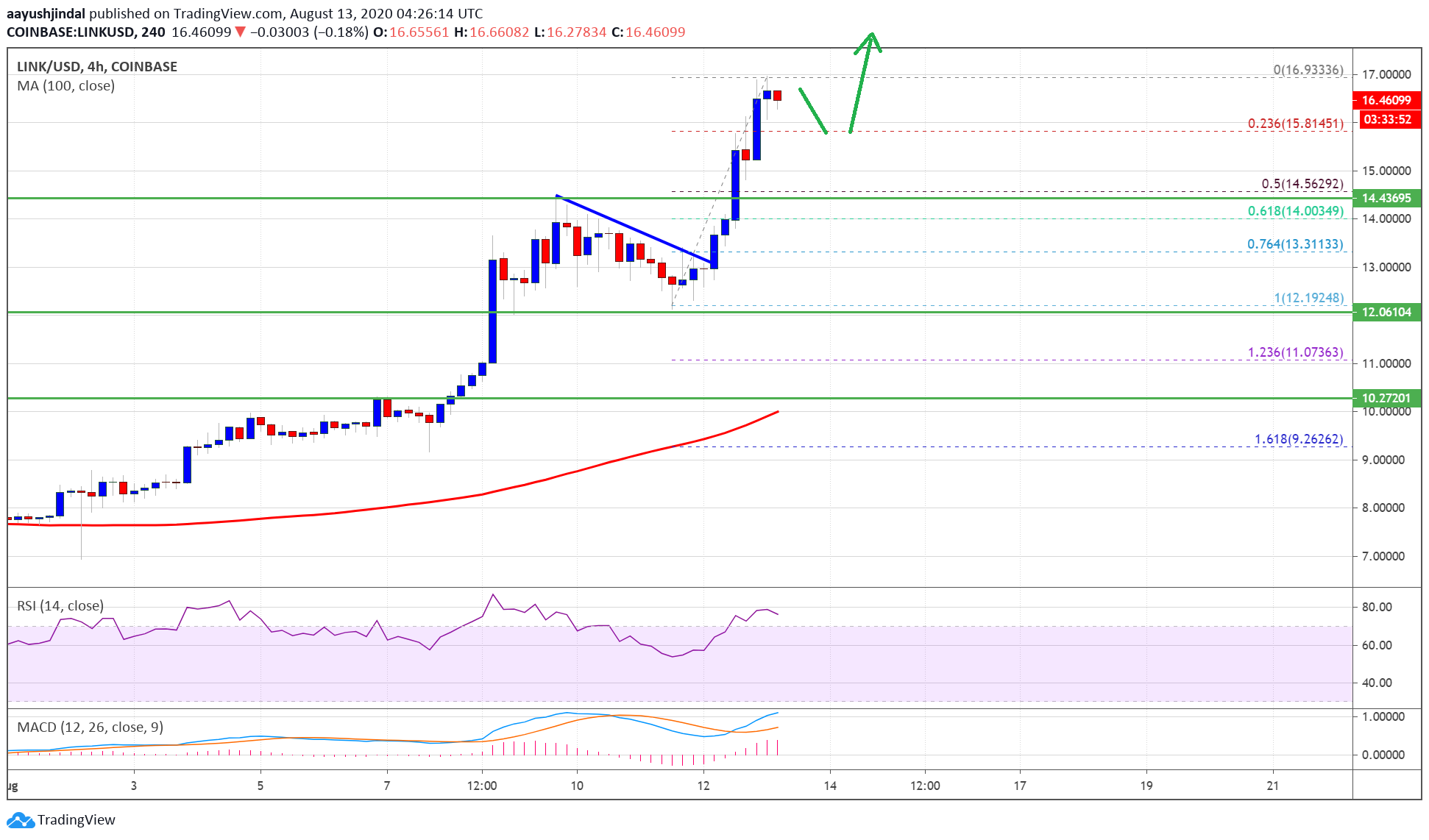 On the upside, the $17.000 level is a short-term resistance zone. If there are more upsides, there is an open space and the price might even test the $20.000 level in the coming sessions.

In the short-term, there could be a minor downside correction in LINK price towards the $16.200 support. If there are more losses, the $15.800 support is likely to act as a strong buy zone.

A downside break below the $14.500 could only start a major downward move. The next key support is near the $12.20 level.

4-hours MACD – The MACD for LINK/USD is gaining momentum in the bullish zone.

4-hours RSI (Relative Strength Index) – The RSI for LINK/USD is currently well in the overbought zone.

Bitcoin Cash Price Prediction: BCH/USD Rebounds as Bulls Attempt a Jump Over the Hurdles at $320 and $340

Bitcoin Cash (BCH) Price Prediction – August 12, 2020
BCH/USD rebounds above $280 after yesterday’s surprising breakdown. There was a general breakdown across the crypto currency markets. The bears sank the BCH below the $280 support which was intended to fall to the previous low at $245 low.

The recent breakdown below the critical $280 support was brief as bulls pushed BCH from its low of $270 to $280 before rebounding. BCH would have fallen to $245 low and later $220 low if the bears are successful. BCH bulls buy the dips to push the altcoin on the upside. Buyers have two major hurdles to jump over before attaining the $400 price levels. On the upside, if buyers break the $300 resistance and rebound above it, the $320 and $340 resistances would be breached. The momentum will extend to $400 high. However, if buyers fail to push above these resistances, prices will continue to fluctuate between $280 and $320. The crypto is at level 52 of the Relative Strength Index period 14. It indicates that BCH is in the bullish trend zone and will rise.

10 Bitcoin Cash Whales Drop, Following 39% Price Surge
Since August 1, Bitcoin Cash surged to over $311. This resulted in 10 Bitcoin Cash whales leaving the network possibly for trading or selling their millions in holdings. According to a crypto Twitter user, Ali Martinez, investors holding between 10,000-100,000 BCH estimated to be from $3 to $30 million has fallen since August 1. The drop was as a result of BCH rising from $224.46 on July 17 to $311.32 on July 31.

In the BCH/BTC chart, buyers and sellers are tussling for price possession in a confined range. Neither the bulls nor bears have the upper hand. The market is fluctuating between levels Ƀ0.024000 and $0.026000. On August 1, buyers pushed price to Ƀ0.028000 but were immediately repelled. The bears pushed price into the range as the market consolidation continues. In the meantime, the BCH/BTC pair is below 60% range of the daily stochastic. The market is in a bearish momentum.

Serum has skyrocketed 1,609% just hours after it was launched

Project Serum has skyrocketed from $0.10 at launch to hit $1.98 just hours later, the biggest gainer of the day in a market that saw major declines for the top cryptocurrencies.

According to data from market aggregator CoinMarketCap, the token’s price reached a high of $1.98.

Although Serum is yet to be fully launched, the project is attracting serious attention from crypto traders. Serum promises to help DeFi protocols surmount problems related to lack of liquidity, scalability and interoperability.

Serum is built on Solana, a blockchain platform that can process up to 50,000 transactions per second, all without a sharding implementation. Its TPS is nearly 10,000 times more than that of Ethereum, with transactions allegedly one million times cheaper.

Serum bills itself as “the world’s first completely decentralized derivatives exchange,” that will not just be  just fast and cheap but also “fully trustless”.

According to defiprime, holders of the Serum token will access discounts on trading fees, as well as stake their holdings to earn rewards. The token’s governance also features a buyback or burn model.

Serum has trading pairs against USDT and USD on FTX and USDT, BUSD, BNB and BTC on Binance. Other trading pairs are SRM/ETH on both the Uniswap Protocol and Balancer Labs.